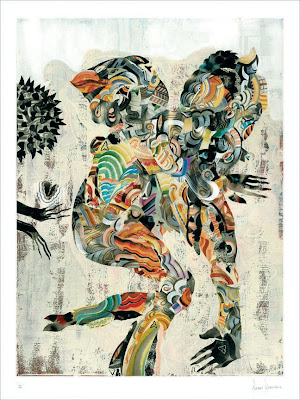 My new art. four color silkscreen, robert hardgrave, awesome. i'm going to hang it above my fireplace.Now i just have to get a fireplace.
Posted by flux biota. at 2:01 PM 2 comments: 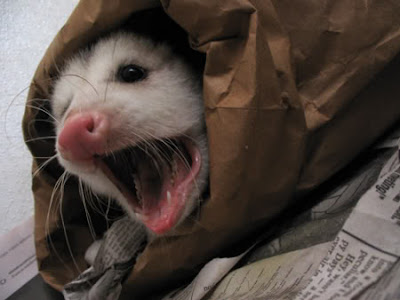 Its getting scarier, friends. Every morning i wake up, hop into my mud covered Honda and drive down my dirty, dirty, dirt covered road. It is always pitch black at 5:30am and the stars are still twinkling. Most people I know would my call my mornings beautiful or serene, lovely and quaint, or even pretty as a picture. But I know better, it may be beautiful and lovely but it is dangerous out there. I don't know why it's happening but every possum in Iowa wants me to hit them with my car. They are nature's buffoons. I've had three little idiots try to walk into my speeding car since the last time i actually pegged one...yuck. I don't want to kill you, animals, stay away from my car. All of you marsupials, rodents, raccoons, and even-toed ungulates (deer) (which i almost hit today) (it was a big ten point buck) just stay away from my car. That's all i ask.

Every night possums haunt our backyard. We have at least four living under the porch. All night long they will clank through my cans, eat my garbage, woo my pregnant cat, and cause general disarray. Some might say,

"Jane, why don't you just throw away your garbage? Then the possums won't come over all the time."

and to them I say, we have no garbage pickup where I live. We have to burn all the paper waste and drive the rest of the trash to the dump...so garbage is on the back burner for awhile. I have better things to do and the garbage will continue to sit behind the cellar door where only the tiniest of possums can get into the stinky bags...the little ones aren't thaaat messy. And, to tell you the truth, I like being able to look out my bedroom window and see a clumsy possum knocking my stuff over. They remind me of me...loud, uncoordinated, messy, and opportunistic. I see myself in those little creatures... so they can live under my porch and eat my garbage, I don't care. At least if they're under my porch it'll be harder to hit them with my car.
*possum image from http://urbpan.livejournal.com/tag/opossum

Down Low and in the Garden...my weekend in Dekalb. 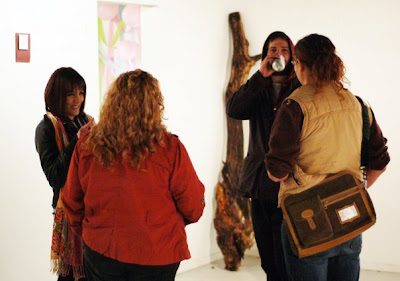 When you live in the middle of nowhere and visit the middle of somewhere it is an eye-opening vacation. I used to compare DeKalb to Chicago...I'd complain,

Man was I spoiled. Because DeKalb has good food. Pita Pete's on Lucinda is delicious and I ate there two times in a twenty-four hour period because i KNOW there is no fallafel or hummus in Eldon, Iowa. DeKalb also has good art supplies. The school book store had all the paper, gouache, brushes, inks, erasers, and various pencils a girl could shake a stick at and I went to the art store two times because i KNOW there is no place in Eldon, Iowa to get gouache and 300 lb watercolor paper. DeKalb still doesn't have a brag-worthy record store but, luckily, Barnes and Nobles had the record i wanted. The Monsters of Folk rock and it's a damn fine record. Not to sound repetitive... I bought it because i KNOW that there is no place in Eldon, Iowa to buy a good album. I bought a lot of things this weekend.
There were also a lot of good friends, art and fun in DeKalb. My buddies (ann flowers, joanna goss, adam cox and Christian campos) and i finally put our work together to create the show, "Down Low and in the Garden." Even though it was rainy people showed up to have some fun, drink PBR, and sell hotdogs to fundraise. I talked so much that evening my voice started to go out...i sounded silly but didn't care and talked anyone's ear off that would let me. We went to the Annex (bar) and stayed till two a.m. which was nice. Then i slept in ann flower's bed without ann flowers in the bed with me. Unrequited. sigh.

The next day I ate, drank, and was merry. Sushi, icecream, pita petes, books, glitter. I even spent the night in a hotel that reeked of incense and my pals came over to be merry as well. This weekend filled me with joy.

Labels: down low and in the garden, gallery, roadtrip

a picture says a thousand words. 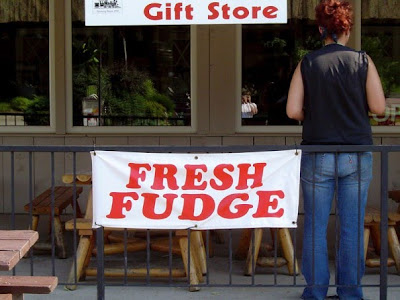 I've had a bad morning because I killed something.

I knew it was going to happen sooner or later, things keep running in front of my car. Today a Virginia oppossum ran in front of my car and I hit the poor thing. I tried to swerve to miss him and nearly drove my car off the dirt road. But I clipped him.

I wanted to make sure he was dead so he didn't have to suffer further. I drove back to check. He was lying in the road, very still. Then he looked at me, wide-eyed. I could see blood was pouring out of him. He was alive and struggling to get to the side of the road. I didn't want him to suffer anymore, he could have lived like that for awhile...

So I backed up my car, took aim, and put him out of his misery. It was terrible and I feel horrible.
Posted by flux biota. at 7:16 AM 3 comments:

possum went a courtin' and he did ride, uh- huh? 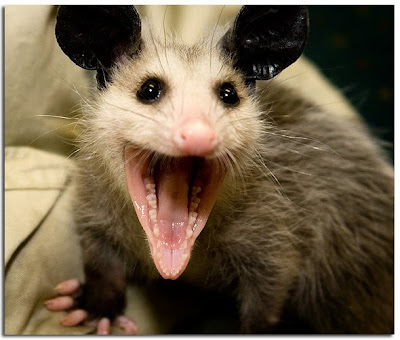 I have a pest problem. It's harvest time in Iowa which means farmers are driving around in their combines collecting crops...mostly corn or soybeans. Mice have been chowing down on corn the entire growing season and have developed a hearty mouse population in the fields. Now that the crops are gone the mice are scrambling to find a warm place to spend their winter...they've decided to spend it in our house, damnit, and we've been finding little mouse turds everywhere. Poop on top of the fridge, under the couch, under the sink, in the bathroom. I'm not worried about the mice so much as the fleas they could be harboring...and I don't care much for their turds, either.

I have a cat that lives outside on the porch, we call her Porch Cat. She's prgnant and hungry and I'm sure she's doing her fair share of mousing to feed her little kitten fetuses. We'll feed her kibble at night but she doesn't always eat all of the food. The other night I looked out the window and saw that the food was gone and I saw Porch Cat cuddling next to a black cat, or so I thought. I yelled to Seth that we had a new black cat friend. I tapped on the window to get it's attention and, I'll tell you what, that wasn't no black cat. It was a giant Possum (opossum) and it was getting awful friendly with Porch Cat. When the Possum saw me it trundled off into the wild blue yonder and Porch Cat just sat there staring at me, mad that I chased off her warm cuddle buddy.

So, I guess Porch Cat doesn't have the killer instinct of a bobcat. Or maybe she's just trying to find a baby daddy. It's nice to see creatures getting along. That possum damn near scared the shit out of me, though. I'm still glad she'll eat a mouse.

I've been thinking about an Apocolypse. 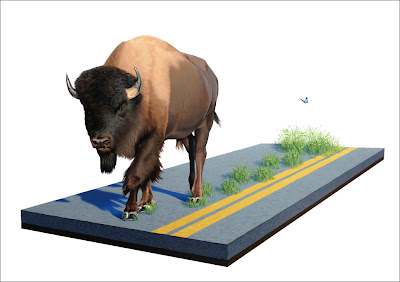 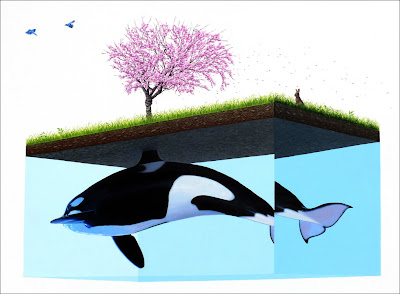 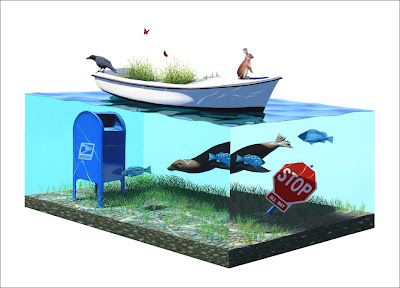 This is what the world will look like when we are gone and animals reclaim their space. Josh Keyes is nostradamus...

I wouldn't eat that if i were you...again. 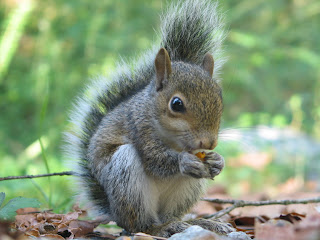 This is a squirrel. Some people think they are disease ridden tree rats...which is sort of true, some of them carry fleas that harbor the bubonic plague and we all know how that went, sores, lesions, and death. Other people think they are pests...which is also true because they'll get into your garden and eat your beets...but i see this quality as being more opportunistic then pest-like and I like squirrels because of this quality. Still yet, other people find them to be delectable, delicious, scrumptious, or savory. I was (un)fortunate enough to make a feeble attempt at eating one of these woodland creatures after Seth brought one home and cooked it up. I was nervous when he texted me and told me what was for dinner...could I really do it? I love squirrels...but I also love cows and I still eat them. When I got home I saw Seth on the porch, the cat was also on the porch munching on a messy pile of guts. This was an instant turn off. I was now afraid of eating the squirrel. When I got to the front door I saw the squirrel's little feet hanging out of the cat's mouth...I was even more disgusted but still determined to try a bite. Within the hour, Seth presented me with a tiny drumstick...I knew where it came from and it was starting to make me dryheave. I put the drumstick to my teeth, pressed down, felt the rubbery texture, and almost vomited on the air mattress. Moral of the story: I would only eat squirrel if I was starving or if it was in a stew and I didn't have to see a cat eating it's innards before I ate it's limbs.
Posted by flux biota. at 1:07 PM 4 comments:

i wouldn't eat that if i were you. 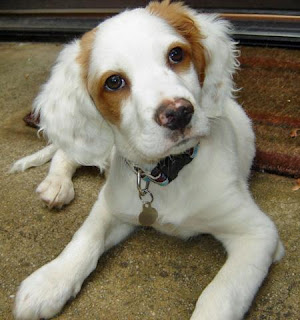 My family came to visit me the other day. Here's what happened :

1. we shot pumpkins and made them explode.

3. we saw strippers taking a smoke break. how did we know they were strippers? fur coats, platform shows, and no pants, thats how.

4. we almost hit a raccon and a possum.

But my favorite event happened while we were driving to the gas station. As we were winding down the dirt road my mom said,

"Hey, guys, look at the sweet Brittaney on the side of the road! What is he doing there, the little scamp?"

The dog pops his head up to look at us while we drive by. His face is covered in blood. The dog sees us and promply shoves his head back into the abdomen of a deer carcass and continues to munch on deer chittlins (deer intestines).

(photo of the brittaney made possible by www.dailypuppy.com)
Posted by flux biota. at 10:42 AM 4 comments:

how i learned to love a cow. 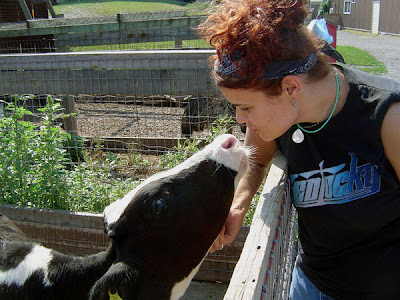 My love affair with the cow began in Canada when I met this happy little fellow. I had never seen a baby cow up close and personal until this very moment in 2005. It was at a winery that specialized in Ice Wines...ice wine is made from grapes that are allowed to freeze on the vine. The wine is very sweet and thick and, in my opinion, disgusting. The winery also specialized in petting zoos and had a variety of furry headed chickens, fly covered pigs, and a couple of scabby eared goats.

This baby cow said, "maaaaaaaa mooooooooo," and I was in love. I ran over to the calf and pet it's chin. The calf stretched out it's neck, I pretended to kiss it's face, and then this photograph was taken by one of my shit-head friends. Then we ate some sandwiches, fed a cat some potato chips, bought some shitty wine, and went on our merry way to Toronto.