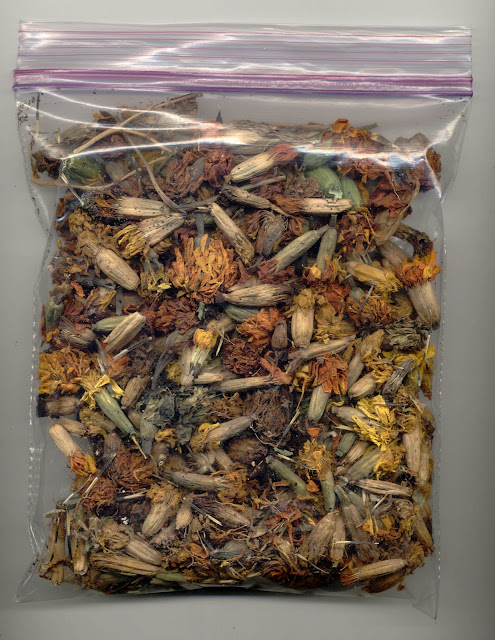 I've been collecting dried marigold blooms all summer long.  Something about this collection is very beautiful.  I can't stop looking at it.
Posted by flux biota. at 5:09 AM 6 comments: 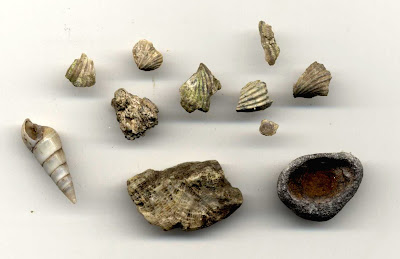 The dry weather has hindered my adventures.  It's a sad thing, really.  When rain water doesn't flow through creek beds weeds quickly take over the crevices.  Poor Jane is left standing in sad, weedy mud puddles wondering what happened to all of her wonderful fossils.  I'm a tough cookie, though.  When I decide I'm going to find something I'll do it and I managed to find a few fossils on the Des Moines River this Saturday.  There's a few shell fossils and a pretty nice chunk of coral (i can't take credit for finding that one, my partner in crime did).

It's always neat to find something that is millions of years old.
Posted by flux biota. at 8:12 AM 4 comments: 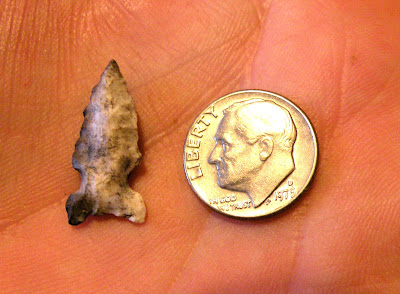 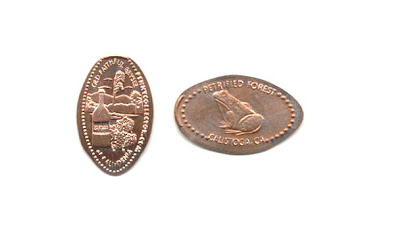 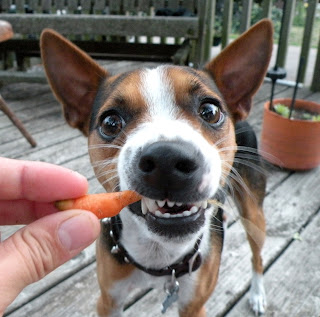 1.  KP, Mudd, and I went on an artifact hunt ton Saturday. Check out what Kyle found, a perfect birdpoint.    It was hidden in tall weeds and he still managed to sniff it out.

2.  My buddy and her family just got back from an amazing California themed vacation.  They brought me back these wonderful smashed pennies.  This is my first smashed penny that proudly features a bottle of booze!  I'm pretty excited about that. 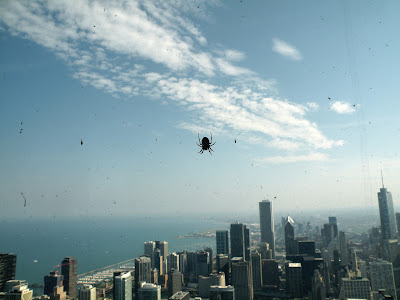 As if we need another reason to be scared of Spiders, right?  I shot this photo on the 95th floor of the John Hancock Building...apparently spiders are excellent at scaling tall buildings.  I'm sure there's a more logical reason this spider is so freakishly high.  Perhaps the sweetest moths and bugs are attracted to the lights on the tallest buildings.
Posted by flux biota. at 8:37 AM No comments:

Peoria, Illinois. I love you.

Rachel and I woke up in Laramie, Wyoming with the intention of making it to Peoria, Illinois by 1am.  It was supposed to be an "easy" 14 hour drive but ubiquitous road construction made it impossible to move quickly.  Man, it's tough to drive through Nebraska.  It felt like we were stuck in an endless loop of boredom.  We knew that making it to Illinois by 1am wasn't going to happen and decided to stop in Omaha, Nebraska to get a hotel and some grub.

However, we did see a few cool things on the drive. 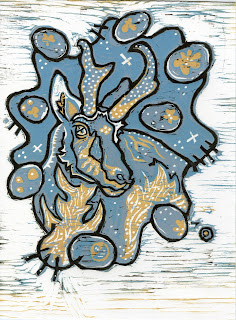 I love pronghorn, they're a unique species.  Pronghorn have been clocked running 53 mph,  they're the second fasted land mammal in the world.  It's always a pleasure spotting them on roadsides.  Pronghorn have inspired me to make art and have showed up in many of my paintings and prints (like the woodcut featured above).

It took awhile but we finally made it to Omaha and checked into a nice/cheap/clean hotel. Google told us that Goldbergs, Burgers, Beer, and Bloody Mary's was the place to be with their consistently good reviews. That place was DELICIOUS!  The Ruben was to die for, the burger was cooked medium rare and was juicy and delicious.  When we finished eating it was time for bed...tomorrow was going to be a big, beautiful day.

Views from the Passenger Seat of a Ford Echo.


(Vacation was amazing.  Rachel and I had a wonderful adventure traveling across the United States.  The trip began in Boise, Idaho and ended in Davenport, Iowa at the worst hotel I've ever seen in my entire life.  So, yeah, a wonderful time was had by all and this week will be dedicated to vacation adventures.)

First adventure:  While trying to find a steak house in Evanston, Wyoming, Rachel and I came across a home with ceramic dinosaurs decorating their front lawn.  It was a rock shop called, Antares Fossils and Minerals (antaresfossils.com).  Of course we had to go in, I love me some rock shop.  While paroozing the various sections of the shop I came across this beauty from the Green River Fossil Biota.  The owner of the shop told us that he uncovered the fossil himself at his Green River quarry.  The owner and his crew uncover 30 (each) or more of these Fish fossils every weekend. The quarry is home to possibly the best fossil record of tertiary aquatic communities (of the Eocene, 55 million years ago!) in the world!