Blue Gill Puppy and my Fearlessness. 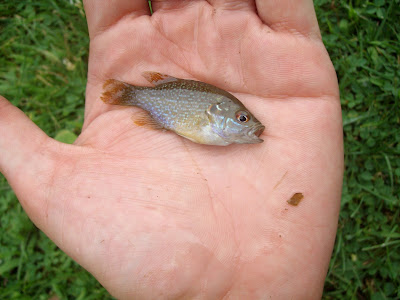 This has been a summer of firsts. This bluegill is one of them. Most kids have a photograph of themselves with the first fish they caught...but not me. I was deathly afraid of fish as a small child.

You may wonder why. Its not that special but very traumatic. My dad used to take my brothers and I to a lake house somewhere in Michigan when we were people puppies. There, I found a fossil at the beach with a fish in it and my dad told me it was older then Jesus. That blew my little mind. I began to think fish had special powers. Kids aren't smart and I began to fear them. I knew there was something wrong with fish and I knew they would hurt me if they got the chance.

My dad would take us out in a canoe to catch bluegill as an afternoon activity. Whenever I saw that little red and white bobber begin to bob in the water i would sweat. I knew that a horrible fish was on the line and would soon be flopping on our canoe bottom...until my dad hit it in the head with an oar.

Dad also took it upon himself to show me that a bluegill was nothing to be scared of. God only knows why he decided that cutting of its head in front of me would help me get rid of my fish phobia. He even picked up the bluegill's head to show me while I screamed uncontrolably...the decapitated fish bit his finger and wouldn't let go. Horrible. blood.

But like I said, this has been a summer of first. I am no longer afraid of bluegills, if anything the bluegills should be afraid of me because of my dad. I caught this guy in the photo, held him in my hand and let him go back home without chopping off his head. And there was nothing to fear.

Since then I've caught a catfish, a true triumph. and thank goodness for baby bluegills, if the photographed bluegill had been any larger I may have thrown it into the bike lane. Baby steps. Baby steps.
Posted by flux biota. at 2:18 PM