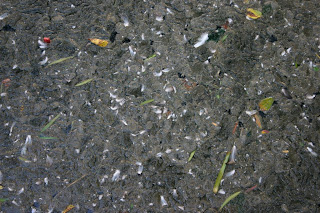 I’ve lived the lagoon for three years and have enjoyed it as a place to sit and watch the ducks and geese eat pond scum on many an occasion. But when you look at the lagoon, from a bench or a sidewalk, it doesn’t look or smell like a place that would harbor abundant life. The only life I noticed were the seventy-five Canada geese that shat at least three pounds or digested pond sludge a day each. and the only smell I noticed was the two hundred and twenty-five pounds of greased goose shit that would float on the lagoon's poopy banks, sit lifelessly on it's grass. Touched by children, sat on by the elderly. It was a messy place

Perhaps... I exaggerate the amount feces produced by a Canada Goose... but not by much. The poop is green, white, and shaped like one of those hockey puck-like snake fireworks but after it’s burned out. That horrific stuff had to pollute the pond. It made the shore of the pond area look like a brownish, muddy wasteland, and the top of the water look like an oil slick, as illustrated in the photograph*. I thought the lagoon water would smother all forms of life except, of course, for the magnificent and shit filled Canada Goose.

That was why I was shocked when I saw a fucking beaver swimming in the water one night. A beaver is a large, brown, rodent with a waffle for a tail, it is known for it's affinity for wood and architechture. Its brown color is apparently camolflodge for its latrine like habitat.

Anyways, this beaver made me believe there had to be other creatures living in that disgusting puddle. I had to find them...

*by the way, this beautiful photograph was taken by mister Anthony Topper from flickr.com, I believe in giving credit where credit is doo (doo, ha) and this is a brilliant photo, I will post some pictures of goose poop tommorrow for you to look at and I believe they may impress you)
Posted by flux biota. at 5:57 PM