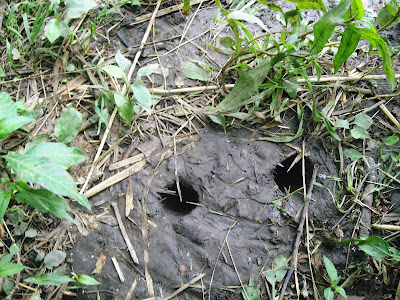 *this is an angry crayfish video.

I decided that I am not ready to write a post about tadpoles today. Tadpoles are complex and strange creatures, they go through many physical changes in a short amount of time. They also look like little swimming faces. It takes time to write about tadpoles. I want to do the tadpole justice as a creature...they have soft tummies and are adorable.

However, crayfish are funny lil' mudbugs that want to pinch you. and they deserve some talking time too. As you can see in my video*, this Chimney Crayfish is an angry fellow. If you look close, you can tell he wants me arrested. If you see holes that look like putt-putt golf holes* (usually in sets of three, two seen in the photo) near the banks of a pond a chimney crayfish is nearby. They live in the little holes their job is to eat dead things. I'm sure it was sanitary to pick up mister pinchers.

I've found bigger crayfish, dead ones too. Crayfish are known for their inability to live in polluted waters...however, the "Rusty Crayfish," which was introduced into Illinois as catfish bait, is changing many ecosystems and pushing out native crayfish populations.