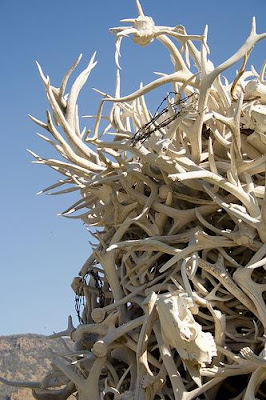 This is a photo of a twelve foot tall pile of elk and mule deer antlers, skulls, held together by balance and barbed wire. Rachel, Matt, Brian and I passed it on our way to Yellowstone National Park...of course we had to stop to gawk.
A mule deer skull had fallen from the pile, we took it as an omen to put her in the back of our car to keep us safe while we slept in Walmart Parking lots and rest areas. We named the mule deer milky and parts of her would flake off like dandruff when she was handled. It may sound silly, but I think she kept us safe.
On that trip we encountered a deranged truck driver who asked us if we had loaded guns while he drank our beer and intimidated us at our Oregon campsite. I was afraid he was going to kill us. At a Walmart in Idaho I walked past a man wearing a navy hoody, he glared at me and then ran away. Minutes later a police officer told me a man fitting that description had shot someone and they were on a hunt for him.
When the trip was over Brian took her home. Milky later perished in a fire. Milky died for us and the experience made me understand why caveman painted bison on their cave walls, sympathetic magic is a powerful thing.
Posted by flux biota. at 8:05 AM