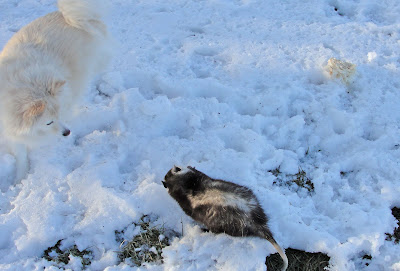 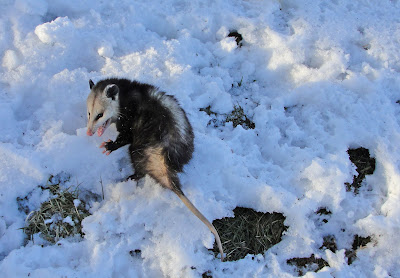 Don't let this possum's scary face frighten you. They're not very bright. They just look kind of scary.

Arkoo doesn't really notice stuff. He doesn't chase most animals. He doesn't care about cats or rabbits. He'll attack a shrew now and again but that's not very impressive. Mostly, he's pretty chill with other animals. He'll even deal with little jane pulling at his toe hair. Simply put, he is a good boy. A very good boy, which is why I was shocked when he took off across the lawn and TACKLED a possum. That thing must have rolled over three times after Arkoo knocked it over, kind of funny if I do say so myself. And a possum playing dead, well, they're not very good at playing dead. I was shocked. I always assumed that the possum stayed "dead" until it's attacker was well on their way to gone. Isn't that what possums are known for, playing dead? They suck at playing dead, they suck very badly at playing dead. As soon as Arkoo turned around the possum would stand up and try to walk off. When Arkoo sniffed at his newly awakened foe it just fell over and played dead...again. This happened six times, I shit you not. What a dummy. Possums are dummies. You can quote me on that.