This weekend was a special kind of weekend. An adventure having kind of a weekend. The sun was shining, it was relatively warm, there was gas in the truck and it was time to see some bison and elk. Now where in Iowa could we do that? The bumper sticker above explains it all, we went to the Neal Smith National Wildlife Refuge in Prairie City, Iowa.

My one critique of the place would have to be the bumper sticker...the bison silhouette is accurate seeing as there are abundant bison. The other silhouette is a caribou...not an elk. There are no caribou there. But I'm an asshole so I'll continue forth with the story. Sorry Neal Smith. I'm not that big of a hater. 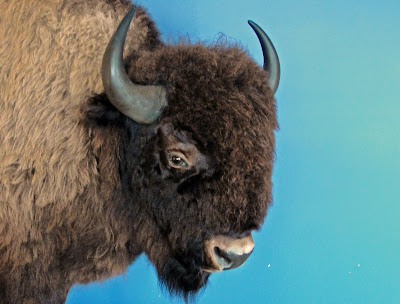 When we first got inside the learning center we were greeted by a nice, old man. He gave us the basic layout of the place and tried to pressure us into watching a 20 minute movie about the park. I wasn't very interested in sitting, I wanted to go interact with the learning center. We politely said,

And after a few more minutes of prodding and guilt tripping we were allowed to go "interact." Above is a lovely example of a dead bison. Below is a lovely example of how GIGANTIC a bison skull really is, that thing probably weighed close to 20 pounds but I'm prone to exaggeration and would encourage you to wikipedia that shit. 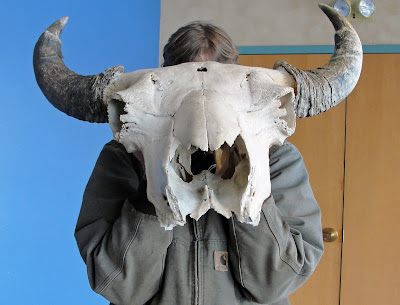 The learning center was great. Lots of information about the prairie ecosystem and there were a handful of artifacts to ooooooooooooo over, which I did. Some of them were broken (crying pieces) but that's just the way things go when you're looking for arrowheads. These were some pieces they found while making the wildlife preserve. 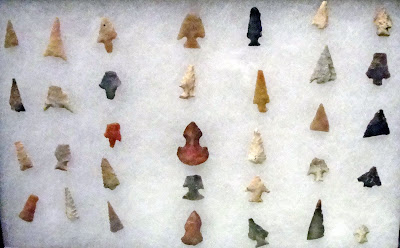 We made it through the learning center and I bought some touristy things at the gift shop.

Then came the grand finale. The scenic drive around the elk and buffalo (bison) enclosure! It started off slow...just a few elk and just a few bison scratching their butts on trees. But we kept driving. We see a couple more bison, then, BOOM...about a hundred of them lying in the snow. They are gigantic creatures. They appear docile but I'm sure wouldn't hesitate creaming me if I got out of the truck to photograph them. 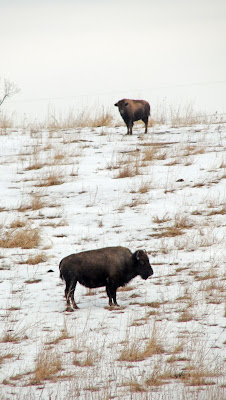 So, overall, a tremendous success. Except the bumper sticker and the tourist trap I got us stuck in on the way out of town. If an owner of a store tells you they are a tourist trap leave immediately, they probably never see people and will talk to you about how their antique store doesn't actually sell antiques for almost an hour and ask you if you saw the movie at the Neal Smith Wildlife Refuge a few times...but once again, I'm prone to exaggeration and you should probably check that tourist trap out for yourself. If you're a masochist, that is.
Posted by flux biota. at 5:02 AM