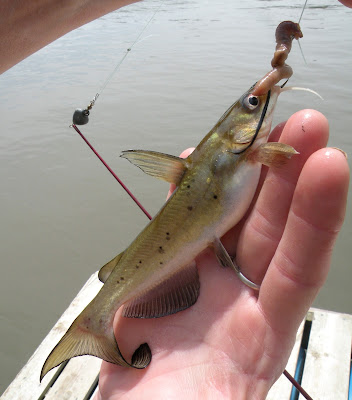 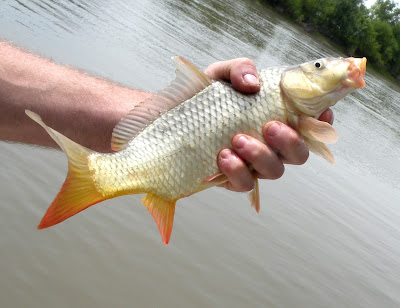 I did a lot of fishing on Saturday.  This strikes me as odd because three years ago I would have never agreed to do so.  Not because I thought it was wrong (unless people are catching endangered fish or are using explosives as bait) but because I used to be completely scared of fish.  As a matter of fact, one of the first blog entries I made on FLUX BIOTA was about my fear of fish.  I must still be a bit scared because neither of those hands holding those fish are mine.  I still don't like to touch them.

The fish up top is a tiny, tiny channel catfish. I caught about 5 of those and they were set free. Channel Catfish are known for their slimy texture, delicious taste, and ability to stab you with their fins.  This is why I don't touch fish, unseen dangers like tiny spear barbs on their fins or poison!  The fish on the bottom is an introduced species called the Common Carp.  They are gross and are related to the goldfish you kept in a bowl when you were a kid.  They are not as evil as the bighead carp, silver carp, or black carp that are currently destroying the ecosystem of the Des Moines river.