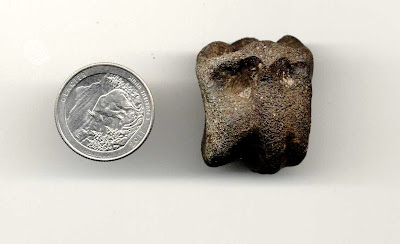 I found a few more things while walking through the skunk river.  This deer knuckle bone was one of the first things I picked up from the dry river bank.  One will come across a plethora of bones while hunting for fossils.  Most bones are just bones, nothing too special.  This one struck me as odd...deer have run around Iowa since the ice age ( http://www.uiowa.edu/~osa/Silos/Ice_Age_Residents.html  this is a nice little article that describes the time, it's short so don't be afraid) and a fossil can be made in about 200 years in the right conditions; pressure, amount of water it's exposed to, the type of soil it's in.  It looked old.  It looked very old.  Like Discovery Channel old. 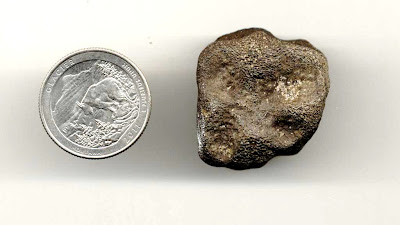 The bone struck me as odd because of the color, feel, and heaviness of it (there hasn't been water in the creek for a month, so the heaviness was not from being water logged.  Which is the case in most bones found in water).  So, I did my "tooth tap test."  Bone will make a hollow clunk on the tooth while a fossilized bone feels like tapping a rock on the tooth.  It felt like a rock.  The I did the "tongue touch test".  If you stick your tongue to a fossilized bones, all of the little porous areas will slightly stick to the tongue (yuck, but a paleontologist suggested the test).  It slightly stuck.  So, in my pocket it went.  I did some research on the internets the other day and it does appear to be a fossilized deer knuckle bone.  Which is cool.  A week later it's still heavy, rock like, and still gets an A on all the gross fossil on mouth tests.  I think it's a fossil.