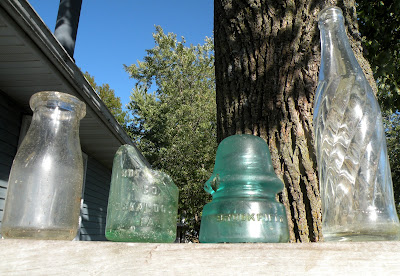 We returned from Ames and decided to go to the camp spot and search the river bank for more treasures.  The water was even lower than it was a month ago...more things were showing.

1. An old half pint milk bottle from the 1940's.  It still boggles my mind that something could exist in a rocky river with a current for so long and barely break.

2.  A broken bottle from the M & M Star Bottling Company.  We actually found this a week ago but the scanner didn't do it any justice, it needed to be photographed.  It's a pretty cool li'l bottle.  The company embossed a star on the bottom.  I have no idea how old this bottle is but people from around the area say it could be from the 1890's.  Who knows?

3. This is a telephone pole insulator from the Bushwick Glassworks Company in New York.  This piece was made somewhere between 1864 and 1923 according to the internet (which never lies). But my guess is closer to 1923 because of the color of the glass. http://www.myinsulators.com/glass-factories/brookfield.html

4.  An old ass Pepsi bottle.  It still has some of the paint from the 40's or 50's stuck to the top but when I washed it with Dawn Dish Soap my dumb ass scrubbed off the ancient paint.  Le Sigh.
Posted by flux biota. at 8:19 AM